[This piece was contributed by Dan Jones, who is also the photographer.  Given the recent developments at the anti-pipeline protest, it is timely.]

A couple of weeks ago I drove to North Dakota to camp, for a couple of days, with the Standing Rock Sioux and many other Native American Tribes and concerned citizens who are protesting the construction of the Dakota Access Pipeline. The pipeline is intended to run from the Bakken Oil Fields fields of North Dakota, 1,134 miles, to refineries in Patoka, Illinois. It is intended to carry 470,000 barrels of oil a day.

Originally the pipeline path was very close to Bismarck, ND, but the people of Bismarck, citing potential environmental hazards inherent in the pipeline, had it moved away from their community. The new path put it crossing the Missouri River less than 1 mile north of the native community of Cannon Ball, ND, and just 12 miles north of the water intake of the Standing Rock Sioux Tribe. It now would cross the Missouri River at a point which is historically significant to the Standing Rock Sioux and contains many cultural and sacred sites.

For permitting, the Army Corp of Engineers used “Nationwide Permit 12”, a permitting process used for boat ramps and bouys, to segment the project into hundreds of pieces and rubber stamp each individual river or stream crossing without ever looking at the impact of the entire pipeline.

Before my visit the Obama administration put a temporary stay on construction extending 20 miles each side of the river, so there was no construction close to the camp or the Missouri river (though construction continues further from the river). Consequently there was no protest activity while I was there, only camp life for two thousand. I was happy to be there under peaceful circumstances.

The camp is rustic but well organized with a central kitchen that seems to operate 18 hours a day. There is a school. There is no alcohol, drugs or firearms allowed in the camp, and while there is some beautiful drumming and chanting in the evenings(the entire endeavor is considered a ceremony), it is very quiet by 10:00. It is a very peaceful and spiritual community.

They are currently planning on staying through the winter, preparations are underway to make ready for the harsh weather.

[Below is a photo essay by Jones] 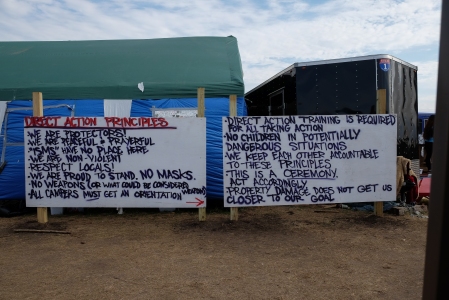