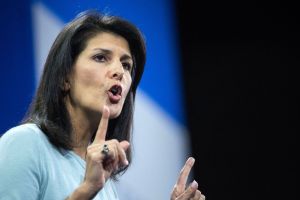 To her great credit, Nikki Haley found this to be the last straw and rebuked her fellow Republican.  “The election is not rigged,” she said forthrightly, “and it is irresponsible to say that it is.”

Politics in the Land of Make Believe

Those folks who chant in unison at Trump rallies might really think the election is rigged.  Trump might even think it.  Is he lying to the public, or is he lying to himself?  Who knows what makes that rattling sound inside his hollow coconut?

But responsible Republicans–count among them Senator Lindsay Graham and Representative Paul Ryan; columnists George Will, Kathleen Parker, and David Brooks–know that talk of rigged elections is bogus.

Nikki Haley numbers herself in that crowd.  She’s stumping for Republican governors in North Carolina and Indiana, while most decidedly not stumping for Trump.  She refuses to be counted among the irresponsible.

But Haley’s more responsible than she admits.  She is herself responsible for undermining faith in our elections. 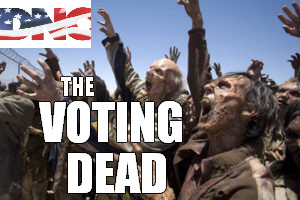 Three years ago, the South Carolina GOP was talking about how over 600 “zombie voters” had wrecked the integrity of our elections.   This claim did not originate with some outlandish talk-radio host, like the stooge, Rocky D.   It came from State Attorney General, Alan Wilson, also a Republican.  Nikki Haley parroted Wilson’s claim, absurd as it sounded, on Fox News.

Democrats rightly insisted that the hullabaloo about voter fraud was all make-believe invented to justify Republican-mandated voter ID laws.   Courts in North Carolina determined that a similar law there was not meant to prevent voter fraud:  the Republican Party was engaging “in purposeful racial discrimination.”

Our version of the FBI–the State Law Enforcement Division, a.k.a. SLED–investigated Wilson’s claim and found no evidence of zombies voting in South Carolina.

Nevertheless, Nikki Haley signed voter ID into law in May 2011, and she and Wilson successfully fought court challenges.

Even now, Haley is still pretending that she “want[s] everyone who is eligible to vote, to vote.”  Meanwhile, she disenfranchised over 200,000 South Carolinians, most of them poor, many of them African American.  All to fight the zombies.

Not the party Orwell would join.  The party he warned us against.  Newspeak.  War is peace.  Freedom is slavery.  Ignorance is strength.

Much of the GOP legislative agenda stands on blatant, cynical lies.

Thank goodness Nikki Haley finally started accepting the reality about the Confederate flag.  Last year, she finally joined Democrats who have been trying to take down the flag for decades.  That’s a good sign.  At least some Republicans feel uneasy with the Party’s recent history.

For years, Southern Democrats pretended that smoking cigarettes did not cause cancer. That was an inconvenient truth, because we grow a lot of tobacco here in the Carolinas.

And of course Democrats invented the biggest of American lies: that Jim Crow was just, that separate was equal, that blacks and whites just couldn’t mix, that blacks were inferior, dirty, and immoral.

But then responsible, white Southern Democrats like Harry Truman and Lyndon Johnson started admitting the truth about Jim Crow.  And the Republican Party saw its chance to woo those irresponsible Dixiecrats like Strom Thurmond.  If the party of Lincoln started prating about states rights, they could get most of the white folks to switch parties.

Pretender to the Throne

And now Donald comes home to roost.  If Reagan was the Great Communicator, Trump is the Great Pretender.

He pretends that imposing high tariffs on China will bring back high-paying blue collar jobs.

He pretends that Mexicans threaten us.  That they are dirty and immoral.  Oh yeah, and they want to rape your daughters.

He pretends that American Muslims are so dangerous that we have to register them, make them wear figurative yellow crescents.

He pretends that he has an alternative to Obamacare.

He pretends that lowering taxes will lower the debt.

He pretends that women are getting abortions the day before they go into labor.

He pretends that he cares about down-and-out white people.

He pretends he cares about inner-city black people.

He pretends that crime is up when it is down.

He pretends that he respects women more than anyone.

Leonard Pitts of the Miami Herald

And so many Republicans are willing to pretend along with him that they made him the face of the party.  They are responsible for this particular creature.  Leonard Pitts put it pretty well recently:  “Donald Trump, in all his preening infamy, is the end result of the GOP’s years of hypocrisy.”

But some Republicans–count among them Governor Nikki Haley and Senator Lindsay Graham and Speaker Paul Ryan; columnists George Will, Kathleen Parker, and David Brooks–find Trump to be irresponsible.  He gives pretending a bad name.

There is no place anymore for responsible people in the Republican Party.  You can argue whether Trump has hi-jacked the party or whether the party created Donald Trump, but either way he’s squeezing out Republicans who tell the truth.  Trump is the New Republican.  Irresponsible Conservatism.

So what do you do if you’re a Responsible Republican?

Call it the new Southern Strategy.  Call yourselves the Dixiecrats.  Fight for small government and strong defense.  Fight to lower health insurance premiums.  Fight for manufacturing jobs.  You’ll get a lot more done as the swing vote in a majority Democratic Congress than as the rump of Trump’s Republicans.