We bought new bikes (Trek hybrids), bought spare inner tubes, and headed up to Pittsburgh on Wednesday.  Just outside Morgantown, we saw this rainbow.  A good sign, right?  Not with water but fire next time.  Apocalypse by fire is a scary prospect, but you want sunshine on a 330-mile bike ride, so we were encouraged.  The West-Texas gully-washer that followed seemed to break the promise.  West Virginians pulled over to the shoulder of I-79 to wait it out.  We kept going.  Did they know something about West Virginia rainstorms we didn’t know? Turned out OK–we got to Pittsburgh in one piece and in time for a great dinner grilled by my older brother, Tim.

Next morning:  bacon and eggs.

“These are center cut,” Tim said.  “Only sixty calories less than a normal slice of bacon.”

And yet the sizzle was undiminished.

Hint one to doing the Great Allegheny Passage/C&O Tow Path is help your brother move to Pittsburgh in 1986 so he owes you.

We started at Homestead, site of the worst corporate violence in American history, striking steel workers versus Pinkerton men hired by Andrew Carnegie.  Tim took this picture of Susan and me before we got on the bikes.  I’m not sure what it’s for.  One of those bullhorns vets put on dogs so they won’t lick up their stitches?

In the background you see one of those bridges that appear about every quarter mile in Pittsburgh–where the steel was free, I think, back in the day.

Weather provided the tension for Day 1.  A repeat of Wednesday’s storms were predicted for Thursday afternoon.  Could we make it the 55 miles to Connelsville?

Smooth sailing to start, and we tackled 20 miles in two hours, eventually leaving behind the pavement and urban setting of Pittsburgh and hitting the hardpack dirt path in the outskirts.  The Allegheny is an old railroad bed, and it runs next to the Monaghela River then next to the Youghiogheny River, wild flowers in the sunlight next to the path, thirty-foot cliffs covered in woods to our right, woods down to the water on our left.  A hundred years ago, this was prime coke country, completely industrial, nature obliterated, as 40,000 coke ovens cooked coal

Typical site along the Youghiogheny.  A car actually went over that bridge into the tunnel just before I snapped this.

getting it ready for the furnaces of Pittsburgh.  Nature came back, and it’s overgrown the old ovens.  They peep out of the woods.  I didn’t get a picture–I’ll try to get one today–like the ruins in Shelley’s “Ozymandias,” testament to the Empire of American Steel.  “Look on my work, ye mighty, and despair!”  Here’s one of those works, another steel bridge, seen through the overtaking vines of Nature.

Typical waterfall seeping from the cliffs

But really Carnegie’s empire is still here, undiminished, in the city of Pittsburgh, and it’s hard to imagine that monument to American industry ever grown over by vines.  I guess that’s what Shelley meant:  when it’s hard to imagine your works leveled, remember Ramses II.

Not an Alabama Lunch

We had lunch in Smithton, one of those old mining towns straight out of The Deer Hunter.  The place was called Pub and Grub, at least that’s what the only sign said, and it didn’t look like a restaurant. Inside nothing but a long dim bar with a video poker machine in the far end and a deer head mounted above it.

We sat down to $1.75 burgers and beer-battered fries.  An example of local color sat to our right in a drab flannel shirt and pint can of beer.  He was talking to the bar tender–a pleasant women who eyed us only a little suspiciously–about breaking up stone with a jack hammer.  We stuck out like sore thumbs.  You see what I was wearing in the photo above, a get-up no honest working man ever wore in his life.  Even so, I thought I might engage him in some conversation, demonstrate how fluent I was in all classes of American strata.  All I needed was an entré, something I could observe or comment on, some common ground between his world and mine.

Barack Obama came on the TV above the bar.  He was saying something about global warming and methane gas.  Then the man at the bar spoke to everyone, addressing the general world, not just his friend the barkeep.

“I’d like to take an ax and chop his head off.”

So I folded up my comment about Bernie Sanders, put it back in my pocket, and turned to the fries.

They say that Pennsylvania is two modern urban areas–Pittsburgh and Philadelphia–separated by Alabama.  Smithton is in Alabama.

Luckily, the cook came out (there were only the three of us at the bar eating) to chat with his clientele.  He sat at the end of the bar, a bald-headed young man, white apron spreading across his belly, his whole body yielding to the limpness your clothes get when you work in a greasy kitchen.

We complimented the burgers:  no false praise there, because they were really good.  That was our entré.

“Where you’d start today?” he asked.

“Homestead,” I said.  “I have a brother in Pittsburgh.”

“Then you’re going back?”

“Where you from?” he asked.

That was the key.  It opened up a whole stream of conversation, how he’d once been to Lake Murray to go fishing.  Across the cove where he was staying was the house of the guy who played Sheriff Rosco P. Coltrane in the Dukes of Hazard.  The cook was scoping us out, and I realized suddenly that the tables were turned: he was the anthropologist and we were the folk.

He told us he went to Florence, SC on a trip to Darlington to see some NASCAR.  Not at all like Talladega.  Those guys in the infield in Talladega were the ignorantest meanest people.  Not at all like Darlington.  That was an old track but it was kept up beautifully and the people were all friendly and nice.

Susan and I beamed appreciation for South Carolina, famed for its hospitality.

“I’ll never go back to Alabama,” he said.

Only twenty miles to go till Connellsville, and it was 1:30.  That’s two hours at our consistent, 10 miles/hour pace.  But the rain finally found us.  The blue sky gave way long ago to the bruise-colored clouds that seemed to touch the hills across the river.  Finally, they started to rain.  But at the very moment we happened to roll into Round Bottom, a campsite with no one in it, and found this shelter, big enough for us and our bikes.  Susan slept.  I read a chapter of Patrick O’Brien’s The Far Side of the World.

When the rain stopped we did the last ten miles, which seemed to take about six hours.  We were leg-tired and wiped out generally, and I was butt-sore.  I had to stand up and pedal at least once every mile for some relief. 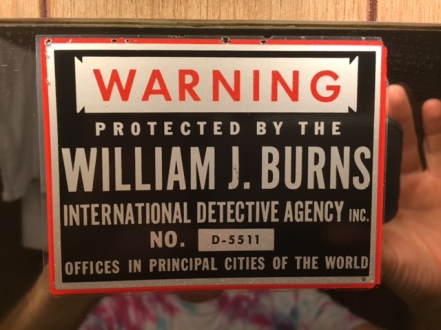 But we made it into Connelsville, rode out of the picturesque town along the river on a squalid highway, past the gigantic campus of the Walmart, and finally to the Melody Motor Lodge, which transported us back to the 1950s, before the internet.  (Though they gave us the password to their Linksys, I’m posting this through my iPhone hotspot.)  The room is vintage:  dark paneled walls, a phone with 35¢ calls, and this bit of warning on the bathroom mirror.  Perfect.  As was Ed’s Diner out back of the Melody Motor Lodge this morning.

Final totals, according to MapMyRide:  54.2 miles and 1750 calories burned.  That’s 29 slices of center-cut bacon, or 18 pounds of grilled veggies.

I’m posting this while the last of the rain sweeps out of town on Friday morning.  We should be on the trail by  8:30 headed to Rockwood.  See you then!