[This column first appeared in the Post and Courier in a shorter version and is published here by the kind permission of the author, Simon Lewis.]

Exactly one hundred years ago the Armistice was signed that ended World War I. The “War to End All Wars” had left 17 million dead and 20 million wounded. It devastated an entire generation. Even the tiniest English village green boasts a memorial listing the young men killed between 1914-18. Every family was touched. Two of my paternal great-grandfather’s seven sons were killed, their names honored “in perpetuity” on the monument at Thiepval, near the Somme, where they died in July 1916. Many families lost all their young men.

Simon Lewis’s grandfather and his siblings

But despite this massive global bloodletting the world has not seen a single day without war since 1918. Even in 1918, the war in East Africa lasted another two weeks before the combatants learned of the Armistice. And as J.M. Keynes predicted, the economic consequences of the peace included renewed warfare that re-engulfed the world within 21 years, bringing with it the horrors of industrial-scale genocide and the annihilating power of nuclear bombs.

So, as we commemorate the centenary of the Armistice, we need to revisit some of the clichés that ostensibly honor veterans but may actually enable continued militarism. First among these is the line that “freedom isn’t free,” which is applied to any conflict that “we” have “won” regardless of the actual historical circumstances. 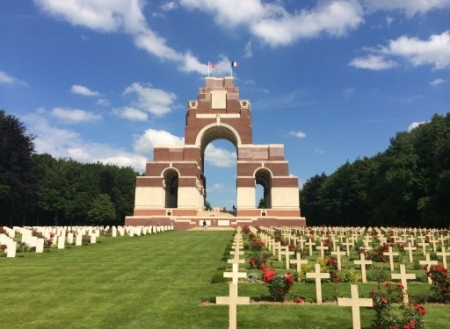 In WWI, the warring European empires were scarcely paragons of liberty and democracy. Just as in 1884 when European rulers divided Africa up among themselves, so in 1919 all of the faces at Versailles were European. Delegations from India, Arabia, Indo-China, Egypt, and South Africa did not get a look-in. African and afro-Caribbean leaders attending the first pan-African Congress likewise made no impression on Woodrow Wilson’s re-shaped post-war world.

The second cliché we use too readily elevates veterans to “heroes.” After it had become clear that the war was not going to be over before Christmas, few of the men who served in the trenches thought of themselves as heroes. And they certainly were not convinced that fighting for king and country was worth it. Between 2003 and 2005 the BBC filmed a documentary series The Last Tommy in which the 27 remaining WWI veterans recalled their experience of the war. The very last of these, Harry Patch, was 102 when filming started, and became something of a celebrity. He insisted not only that WWI was a massive mistake but that war in general is an appalling waste: “It wasn’t worth it,” Patch said. “No war is worth it. No war is worth the loss of a couple of lives let alone thousands. . . . . the First World War, if you boil it down, what was it? Nothing but a family row. That’s what caused it.”

Patch’s reminiscences resonate with the moving literature produced by his comrades. Pre-eminent among these is the poet Wilfred Owen, he who finally nailed the “old lie: dulce et decorum est pro patria mori.” Owen and his fellow WWI poets were scathing in their criticism of the generals who sent their generation of “doomed youth” off to “die as cattle.” One of Siegfried Sassoon’s bitterest poems, “The General” describes a jovial general greeting soldiers with a smile  “As they slogged up to Arras with rifle and pack. /But he did for them both by his plan of attack.”

In fact, many of the British soldiers were aware that they had more in common with their “enemies” than with the officers and politicians whose orders and plans they were expected to carry out. Owen’s “Strange Meeting” describes a dream in which the poet meets a dead soldier who greets him with the line “I am the enemy you killed, my friend.” Isaac Rosenberg, the son of Jewish immigrants, writes even more scathingly about the absurdity that made men into enemies. In “Break of Day in the Trenches,” he writes of a “queer sardonic rat” that scurries between the trenches. “Droll rat,” he says, “they would shoot you if they knew/ Your cosmopolitan sympathies./ Now you have touched this English hand/ You will do the same to a German/ Soon, no doubt.”

Neither Rosenberg nor Owen saw the end of the war. Rosenberg died in April 1918; Although Owen could have sat out the last months of the war, he returned to the front in July 1918 in solidarity with his fellow soldiers and out of a sense of obligation to record the war’s atrocities. His mother received the telegram informing her of her son’s death on November 4th, 1918 as the church bells rang out to celebrate the Armistice.

As we honor this centenary, therefore, let us remember not only the bravery and valor of the millions of men who marched away to almost certain doom, but let us also remember the folly of war, and, as Wilfred Owen insists, the pity of it. And let us labor to avoid the kinds of political failure that allow entire populations of fellow human beings to view each other as “enemies.”

Department of English, College of Charleston

[As a culmination to the “When the War Is Over” series of events over the last year, Professors Rich Bodek and Simon Lewis coordinated a poetry-reading marathon on Cougar Mall at the College of Charleston, Monday, November 12th, 2018.  Poems in English, French, German, Arabic, Italian, Latin, Russian, and Hungarian were read at 11-minute intervals between 9:54am and 3:10pm. Javier Polo played “The Last Post” at 11am and 11:11 am.]