[Steve Bailey is doing a great job keeping an eye on the growing scandal of SCANA’s nuclear reactor project.  Here is his latest op-ed from the Post and Courier.]

So with consumers yelling for heads to roll, what is South Carolina Electric & Gas planning next? The largest stock buyback in the company’s history, which will help shareholders and bolster executive bonuses.

Kevin Marsh, chief executive officer of SCANA Corp., SCE&G’s parent company, has told us that he is “deeply disappointed and sorry” the utility has decided to abandon two nuclear reactors after spending $9 billion with its partner, state-owned Santee Cooper. The company says it wants to use its share of a $2.2 billion settlement with its bankrupt contractor’s parent to avoid more rate increases.

“I understand and share in your frustration,” Marsh wrote in this newspaper.

In a call with Wall Street analysts and in answer to my questions, SCANA executives said the company plans to repurchase about $1.2 billion of its shares — or 13 percent of the total at today’s prices — over five years as it “moves from being a net cash user to be a net cash generator” with the shuttering of its Fairfield County moneypit.

At the end of June, SCANA had only $91 million in cash, company reports show. Thus, the utility must generate more than $1.1 billion in excess cash over five years to complete the buyback. This cash would be generated on the backs of customers, or ratepayers, and will reward shareholders without providing any rate relief.

The buyout needs no regulatory approval, unlike the $4.9 billion SCANA is seeking to recoup for the failed reactors.

Under SCANA’s plan, ratepayers will be paying for others’ mistakes for 60 years, but earnings will be unaffected, Chief Financial Officer Jimmy Addison told the analysts. Earnings will continue to increase at 4 to 6 percent over the next three to five years: Two-thirds of growth will come internally and through cost controls; about one-third will come from the buyback, Addison said.

Awash in cash, U.S. companies have gone on a buying spree over the last few years, repurchasing shares at a record pace. Advocates say buybacks are another way, along with dividends, of sharing profits with shareholders. But critics say buybacks promote short-term thinking over long-term investment in the business. Executives use buybacks to increase stock prices and boost their pay, they say.

“Combined with pressure from Wall Street, stock-based incentives make senior executives extremely motivated to do buybacks on a colossal and systemic scale,” William Lazonick, a professor of economics at the University of Massachusetts Lowell, wrote in a ground-breaking Harvard Business Review article, “Profits Without Prosperity,” in 2014 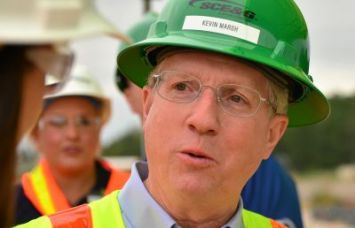 Take SCANA. According to the company’s proxy statement, half of executives’ incentive pay is based on earnings per share. In 2016, for instance, Marsh and his top executives got 130 percent of their bonuses pegged to EPS because the company exceeded its target by 16 cents a share. They also got 100 percent of their bonuses tied to their personal goals, including “oversight” of the Fairfield reactors.

This is not a joke — it is right there in black and white.

Last year, Marsh made $6.1 million, including $4.3 million in incentive awards, which are determined in equal parts by meeting the EPS and personal targets. Addison, the CFO, made $2.6 million, about $1.7 million of that from similar benchmarks. And on it goes.

SCANA said the buyback, scheduled to begin next year, is an effort to remake its balance sheet after pulling the plug on the nuclear units.

“The purpose of the buyback is to bring more balance to our debt/equity ratio, which ultimately helps control cost to customers,” company spokesman Eric J. Boomhower said in an e-mail. “Equity costs customers about 10.25 percent, whereas debt costs about 6 percent. If you get the balance too far from 50/50, the cost goes up for the customer.”

Equity is more expensive than debt, but the effect on the customers is marginal, very marginal. SCE&G is allowed a return on the rate base — the amount invested in property, plant and equipment to deliver electricity — and the debt-to-equity equation will matter. But the effect on bonuses will be much more dramatic.

The cost of the V.C. Summer reactors has doubled, and construction is years behind schedule. Executives typically get fired for this kind of stuff, not bonuses.

But Marsh still has his job because he has protected his bosses — the shareholders — from the costs of the company’s mistakes and shifted them to customers.

He has gotten paid handsomely for the job he has done — and the buyback will help keep the good times rolling.

[Steve Bailey writes regularly for the P&C commentary page. He can be reached at sjbailey1060@yahoo.com.]