[Steve Bailey’s commentary appeared first in the Post and Courier on 4 March.  It is reprinted here with generous permission.]

Call it a tale of two beaches. You be the judge.

On Sullivan’s Island, unhappy residents have waged a six-year legal war with the town, complaining that the growth of a “maritime jungle” has obscured their ocean views and hurt their property values as the beach has expanded over the years. Coyotes and raccoons and possums roam wild when day turns to night. Or as Dorothy would have said: Lions and tigers and bears, oh my!

Forty years ago, just next door on Isle of Palms, J.C. Long knew exactly what to do when the shifting sands added as much as 700 feet of beach to the western end of the island: He brought in the bulldozers.

It was Christmas-time 1974, when Long’s bulldozers started leveling 75 acres of magnificent sand dunes from Breach Inlet to near 10th Avenue. The desecration of the beach continued for almost two weeks until a judge, responding to the state’s attorney general and outraged neighbors, stopped him, at least temporarily.

Testifying in a six-day trial two years later, the larger-than-life developer who gave us the hideous Sergeant Jasper apartment building, which haunts us to this very day, said he had the dunes flattened “to see what I’ve got there” before deciding to sell or build.

“Has your ownership or control of the land ever been questioned,” his attorney asked.

“Never, not until the state came up here,” Long answered.

“Have you ever dedicated any part of it to public use?”

“Never,” he said, adding he generally allowed the public to use the land as long as they were “desirables and behaved properly.”

Long’s bulldozers sparked an epic court battle. Angry residents lowered their flags to half-mast and said the destruction of the dunes left their homes exposed to hurricanes. A state senator called Long’s land grab “a classic example of greed on the part of a developer who’s gone completely berserk.” A young lawyer named Joe Riley said it was the people’s beach, not Long’s.

But when the smoke cleared, J.C. Long had won. And he and his Beach Co. cashed in by building a new front row that stretched a mile down Ocean Boulevard. The neighbors’ ocean views were now views of a wall of large, expensive beach homes.

Like their Isle of Palms neighbors before them, some Sullivan’s Island homeowners are fuming about the loss of their ocean views as the beach expands. But unlike the Isle of Palms residents, this new generation of Sullivan’s Island whiners has lost their views not to other multimillion-dollar beach houses but to a magical maritime forest.

If you have not visited the Sullivan’s Island forest — more than 100 acres of wild dunes and wetlands, wax myrtles and cattails — go immediately. If you have been there, go again. It will make you happy.

Boardwalk through the maritime forest (www.sullivansisland.com)

This is one of life’s unplanned miracles: The beachfront has accreted as much as 1,500 feet since the 1940s as sand trapped by the Charleston Harbor jetties moved ashore on the western end of the island near the lighthouse. Most beach communities would be grateful to have this problem: The vast majority of Atlantic shorelines are eroding.

But the Sullivan’s Islanders who have lost their views have instead sued. They complain that the forest harbors snakes and rats. It is a fire hazard. The lost views have hurt their property values.

“Save Sullivan’s Island,” their yard signs shout. “Beaches Not Forests!” Translation: “Save Our Million-Dollar Views!”

Stop it. If you are unhappy, there is no shortage of rich people who would be delighted to pay a fortune to live next to the forest.

In 1991 — about two decades after Long bulldozed the Isle of Palms dunes — the Town of Sullivan’s Island showed great foresight in granting the accreted land to the Lowcountry Open Land Trust for $10. The trust then conveyed the land back to the town with deed restrictions protecting the habitat. The residents, citing the original terms of the deed, want the right to cut shrubs and trees to a height of no more than three feet to restore their views. The town has sought common ground by approving a 100-foot “transition zone” that would allow clearing of some vegetation in front of homes. 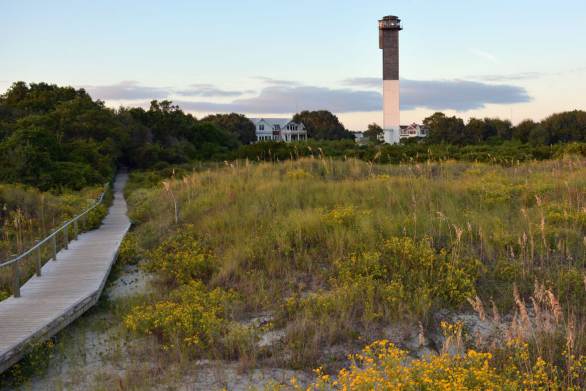 Go see for yourself. Hiking through the dunes and the forest on a weekday afternoon, you can find yourself absolutely alone. Look around. Look up. Listen. All there is to see and hear are the forest, the sky and the waves lapping the beach — this 20 minutes from downtown Charleston. And it is completely free, assuming you can find a place to park. Or, better yet, ride your bike!

We owe our sincere thanks to the town and its people for this miracle by the sea. It takes only a sense of history to appreciate that in another time and in another place a man with a bulldozer might have judged us all undesirables.

Be thankful — for we are blessed.