[This post originally appeared in the Post & Courier, Sunday, 20 November 2016.  It is reprinted here by Steve Bailey’s permission.] 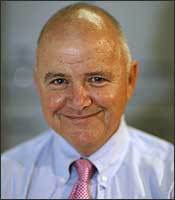 Twelve years ago an engineering firm hired by the City of Charleston estimated it would cost $5.5 million to rebuild Low Battery, the iconic seawall that for more than a century has been a magnet for tourists and protected the South of Broad neighborhood. Today, a new study puts the cost as high as $110 million.

It doesn’t take an engineer to know that Low Battery, which stretches along the Ashley from Tradd to “The Turn” at White Point Garden, is in trouble. Just take a walk at low tide: The sidewalk is cracked and slopes into Murray Boulevard. The seawall facing the river has large holes and gashes, allowing water to get behind it. The concrete posts and coping are in dreadful condition.

What you can’t see is even worse: The timber and concrete foundation, designed to be 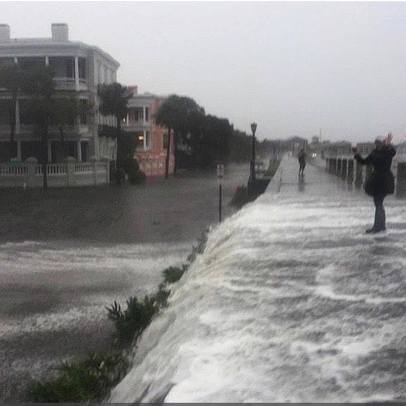 Flood waters over the Battery in October 2015.  Photo by Bob Waggoner

completely buried to prevent rot, has been exposed to the air and seawater, posing “the greatest threat to overall wall stability,” a study warned last year.

“A very serious storm combined with water washing under could cause a portion of the wall to collapse,” JMT, a Mount Pleasant engineering firm, said in its report.

Charleston has been battered by two serious storms in a year – the Thousand Year Flood in October 2015 and Hurricane Matthew last month. And yet Low Battery stands. How many storms until our luck runs out?

Low Battery is a major risk and a huge cost facing Charleston. But it is something even bigger: It is a symbol of decades of neglect in dealing with the threat of the rising seas. While we built aquariums and concert halls and museums – all nice things to have – we woefully underinvested in the infrastructure needed to keep the city from sinking into the harbor.

In the last 70 days of his four decades as mayor, Joe Riley pushed out not one but two reports dealing with the threats of the rising tides: One on the need to repair Low Battery and another on climate change.

That urgency followed by a few months an embarrassing PBS report that cited Charleston, one of the nation’s most vulnerable cities, as an example of local governments ignoring global warming. On camera, the mayor seemed less than concerned.

The Battery is Exhibit A. 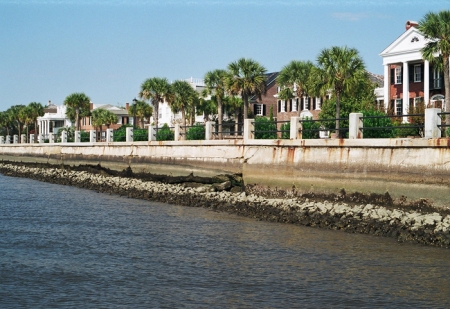 In 2004, Cummings & McCrady, a city consultant, found the Battery was in dire need of repairs. Not until Hurricane Sandy demolished New Jersey and New York in 2012 did Riley find $2.7 million to rebuild “The Turn,” where High Battery meets Low Battery. If Riley did no more, he did leave behind yet another study for his successor, John Tecklenburg – issued in October 2015, but not put on the city’s website until this month.

This one like the report more than a decade earlier, warns of the dire condition of Low Battery. But this time the price of our neglect is much, much higher.

In its report, JMT, the engineering firm, lays out a menu of options ranging from a low of $32.2 million for repairing the 4,800-foot seawall to about $110 million for demolishing and replacing Low Battery as Riley did at “The Turn.” Cummings & McCrady put the price at $5.5 million, something we couldn’t afford at the time.

The city is weighing the alternatives and hopes to have a plan ready by early next year. The most likely option is to repair and raise the seawall about 2.5 feet. A city official put the price in a broad range of $30 million to $70 million, possibly paid for by the city’s accommodations tax. The work, to begin at “The Turn” and proceed to Tradd, could be done in as little as three years, but the pace will be dictated by the funding.

Whether the 2004 estimate was ever realistic, what the numbers do tell us is that the cost of keeping Charleston afloat is going to be a lot bigger than we knew. And what two major storms in a year tell us is we can no longer afford to wait.

Low Battery isn’t the last seawall we are going to need to build or rebuild. We are going to need a wall along Lockwood Boulevard, which is regularly swamped by king tides on sunny days. The drainage project on Calhoun West near the hospitals will be another big-ticket item.

West Ashley has problems, too, like the Bridge Pointe townhouses in the Shadowmoss neighborhood, which have flooded four times since 2008.

Whatever the eventual number, it is going to dwarf the $235 million the city has set aside for drainage projects since 2000. We are going to have to look to where the money is: the 5.1 mil lion tourists who visit Charleston every year.

There is already a 9.5 percent accommodations tax on visitors in Charleston. But the rising tide of tourism tells us there is room to raise taxes on visitors. If we can increase the sales tax on locals to pay for roads and mass transit, we can raise taxes on tourists to stop the place from sinking into the harbor.

Consider: Charleston County hotel revenue grew to about $750 million last year. A 1 percent tax on that would yield $7.5 million for a fund dedicated to flood-proofing the city. Add in the bed and breakfasts and the (legal) short-term rentals and it would be a decent start.

Charleston is a jewel. Everyone is going to have to pitch in to save it.

One thought on “Fixing the Battery”