WE could walk.  That was the first thing to notice coming down the stairs in the morning.  Our quads had not seized up like a bike crank does when the chair comes off.

We stayed at this house.  Dairy farmers Debbie and Lynn (?) bought it in 1998, spent three years restoring it, before they opened it up as a combination B&B and Bike Shop.  They still raise cattle–beef, not dairy, which is what counts as retirement I suppose.

I asked Debbie if she grew up in the area.

“Oh yes,” she said.   She’s a little older than us, maybe sixty, dressed as neatly as the house is decorated.  She sits down at the breakfast table, friendly but also holding something back.  It’s the difference you find between someone running a B&B and someone checking you in at a hotel.  A sincerer connection, but that sincerity means you, the patron, penetrate to the wall of reserve, a place never even glanced at in the superficial interactions at a hotel.

Her grandfather (great-grandfather?) came here as a miner, an Irishman, bought a little property, built his own house, married a German woman.  “A lot of what they ate she raised in their garden,” she said.  “Hunted deer out of season.  Small game.  That’s how they got most of their meat.”  It was a hard life, but they planted roots and the family stayed put.

“This reminds me of Ireland,” I told her.  The B&B sits right above the Casselman, and you can hear a big creek tumbling into the river over steep rocks, a drone of every-varying, ever-constant sound.  So many Irish towns, built on bridges over little mountain rivers, have the same sound on their main street.

“With the farm I guess you can’t get away.”

Debbie jumped up to fetch a book from the other room, Song of the Silent Harp by B. J. Hoff.  She just about beamed when she told us she’d read all five books in the series.  “It’s history,” she said.  “Well, not history of course, but they’re full of history.”

I glanced at the back and caught a few words, potato famine and Killala and Ireland’s Darkest Days.

“They come to America,” Debbie said.  It’s the first of five books in an immigrant saga.

I begin to smile the inward smile of affectionate condescension, but two things stop it cold.  The first is that through most of Day 2, Maturin and Aubrey were in the doldrums hoping to catch the Norfolk before it rounds the Horn.  This is the third time I’ve read The Far Side of the World.

The second thing is a memory of Conseula Francis, her beaming smile, her genuine love of what academics call “popular” culture.  She studies romance novels and comic books, and there’s nothing condescending about her affection for Star Wars.  She studied romance novels, I should say.  Past tense.  Conseula, our colleague and friend, died suddenly early on Monday.  Susan and I have thought about her about twenty times each day, and we’ve talked a lot about her, about her family, about her friends.

A very tall man, maybe 60, came down the stairs in tight-fitting biker shirt with ads like a NASCAR racer.  They look about as fit as we are, no better no worse.  They’re from Tennessee.  They’re doing the Allegheny the other way–came up the steep hill from Cumberland yesterday.  We feel a solidarity of experience, these two biking couples and the B&B host who caters to them.

On the trail, you see several kinds of people:

The man from Tennessee had a faulty tire the previous day,  a slow leak he wants fixed.  He’s talking bike talk with Lynn, Debbie’s husband, who runs the bike shop.  I decide that I’m going to join this parliament of bikes, so I tell Lynn I want to check the pressure on our tires before we head out.

“What pressure do you want?” he asks.

Luckily, I’m fussing with the panniers, and I can easily glance to the side of tires, where I read the recommendation.

“But what pressure do you want?  In that range.”

Uh-oh.  He’s about to discover I’m an imposter, that Susan and I are just day-trippers posing as through bikers.  But I don’t panic.  I ask, “What do you recommend?”

“Let’s do 85.”  Like Aristotle, I tend towards moderation in all things.

He hands me a foot pump with a little gauge near the bottom and says, “Here, you do yours.”  He begins working on Susan’s tires.

Uh-oh again.  I thought he was going to use a compressor, the kind of air hose you used to find at gas stations.  I look at the pump.  It stares back at me like a cow that needs to be milked stares at a city boy.  The very end, where you attach it to the stem on the tire, has got a little lever.  I can’t remember:  do you stick it on with the lever up and lower it to make the seal, or is it the other way around?  I glance at Lynn, but his leg is in the way.  I try lever down, attach, lever up, pump.  The gauge seems to work, though I’m not sure.  It seems to go flinch up with each stroke, but I’m not sure.   I pull the thing off before I deflate my tires by accident and pretend my bike’s done.  There.  Done.  Unexposed.   Still deserving of the salute.

So, as for the biking.  No very great difficulty.  Every mile we’re nearing the highest point of the trail, the Continental Divide, but it almost seems like we’ve come out of the mountains.  No dramatic river gorges.  No remote wildernesses.  We’re behind farms.  Modern windmills peek over the trees.  We cross a bridge spectacularly high, and we see the churning river below, but running next to it is a four-lane highway, which mars the affect.

The trails gets busier, suggesting we’re closer to civilization rather than more remote from it.  We get coffee at the Meyersdale train station, converted to local museum and run by a tall man with the face of the Keebler elves on the cookie box. He knows Debbie and Lynn.  The man from Tennessee came through yesterday, and the museum man called the Rockwood Bikeshop for him. 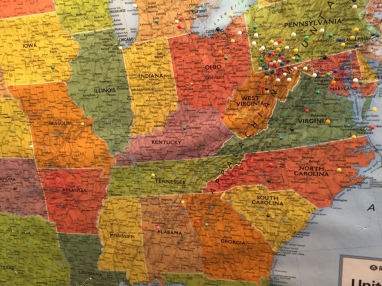 Map at Meyersdale museum showing hometowns of bikers.  The pin in Charleston that I just stuck in does not show so well.

Bikers galore gather at the station.  It seems to be a popular starting point for day-trippers, and this is Saturday.  A gaggle of six or seven young children on their tiny bikes led by two women.  Three teenagers–two boys and one girl–head in our direction.

“Rain might hold off,” the museum man says, looking at the sky.

I toss my coffee, and we head out, passing children and teenagers in the rolling farm country.  Right as the rain starts we pull up to a trail head with a real bathroom, not a port-a-john, and a two-picnic table pavilion on a cement slab.  We pull in to wait out the rain.  Across the way, where cars park to access the trailhead, a troop of boyscouts are assembling their bikes.  They have an assortment of ineffective rain-gear–those clear plastic ponchos they sell at ball parks for a couple of dollars.  We watch them placidly, mostly dry, sitting on our picnic table, and wonder why they’re toiling in the rain.  Maybe they know it’s going to stop soon anyway.  Finally, all is ready.  They ride off in a straggling line.  We watch them disappear.  We wait for the rain to let up.  When it does, we head out.

But it catches us a quarter mile down the path, and there’s nothing for it but to keep going.  Up ahead we see the Continental Divide, which looks like little more than the passage under a highway overpass.  It’s a short tunnel through a low ridge, so unimpressive it was not worth stopping in the rain to take a picture.  Under the shelter of this passage we find most of the boy scouts.  Some are playing in the rain, taking turns riding down a steep trail of dirt, and we have to time our approach not to get run over.  Inside the passageway, people part for us.  They have the cold, wet faces of refugees, and their bikes are bedraggled like the stuff of refugees.  But Susan and I are through-bikers with our rain gear and panniers, so we keep going.

Our vague hope that the weather might be different on the other side is dashed as we come out again into the cold rain.  But there is one difference:  after two-and-a-half days of slowly climbing, we begin the descent.

Oh the pleasure of it!  Our quads sang for joy!  The tires hummed with speed.  They sent trails of water streaming up behind.  High-speed rain pelted our faces.  We had to tap the brakes to keep from going too fast.

The altitude we gained over 125 miles started evaporating.  It disappears in a mere 25 miles. 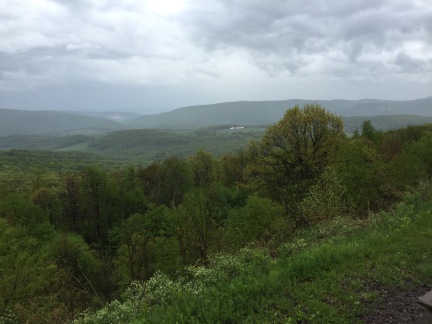 And the landscape becomes spectacular again, vistas of remote valleys, ridges touching the clouds, mist steaming from the hidden streams.  But to see them we had to look back over our shoulders, and we were sweeping downhill at 15 miles an hour, which was about as fast as we felt we could safely go.  And we were wet and cold and miserable so there was no stopping at the overlooks.

Pannier adjustment in the tunnel

Through the long, long Savage Tunnel, our tires humming now in dry dirt, we paused to consider waiting out the rain, but we thought it would never end and it was better to go on and get it over with.

One quick stop on the downward plunge to take a picture of the Mason/Dixon line.  But hardly more than a pause there and no deep reflections about a nation divided, free states from slave.  It was too wet to think.

Occasionally we saw someone worse off than us, laboring up the hill rather than down, carrying panniers on both wheels.  We made our salutes.

Cold, wet, desperate, we stopped for lunch in Frostburg, climbed the dozen rising switchbacks to reach, finally, this refuge, where we ate grilled cheese and not quite hot soup.

When we got back on the road, the rain had stopped.  Only the ground was wet–the ground and us, who were so soggy through and through that when finally we came in sight of Cumberland felt the relief of long-travelers in bad weather:  we came indoors at the six-floor Ramada Inn and felt those automatic doors close out the elements.  We breathed the quiet, warm atmosphere of the lobby.

Cumberland at the end of the long downward chute